When Mark’s parents first met with Elim’s team after his enrollment at Elim, they were clear in their goal for their seventh-grade son. They wanted Mark to learn strategies that would allow him to be accepted back into their local school.

“Academically, Mark was succeeding at his local district school. He could read at grade level but he had some struggles that were holding him back,” Elim behavior therapist AnnMarie Sulkowski explained. “Mark had a hard time transitioning between activities and getting off the bus in the morning. He had difficulty staying on task throughout the school day. That made it impossible for him to stay at his district school.”

After that meeting, Elim’s team designed a plan to help the family achieve their goal. Elim’s staff set clear expectations for Mark and remained consistent with them. They created a daily visual schedule for him and designed a social story that outlined the result of positive choices. Because Mark understood the expectations and experienced consistency, his motivation skyrocketed!

Mark experienced steady positive growth in multiple ways. Not only was he able to better transition between activities and stay on task, he became more comfortable socially as well. He began to help others, joke with friends, and initiate conversation with those around him. Mark’s family and Elim’s staff cheered with his progress, but they never forgot their long-term goal—to equip Mark to thrive in his local public school district as well.

In June of 2018, Mark graduated from Elim’s middle school knowing that he would not be returning to Elim for high school. Elim’s staff was so proud to learn that Mark had been assessed and would be able to return to his local public school. Because of your support, Elim is able to equip students like Mark with the skills they need to thrive in their home, school, and community!

Mark’s parents shared the following words at his graduation:

“Mark came to Elim as a seventh grader. When he started, he was sad, isolated himself from others, and had low self-esteem. As he became more comfortable, he began to blossom. Mark became more confident in himself and was willing to try new things. He started excelling in his academics and initiating conversations with others. Whenever someone is feeling down, they know that Mark will cheer them up. He now enjoys telling jokes and having fun with others. Mark would like to thank everyone who has worked with him in middle school and will miss them as he goes to high school.” 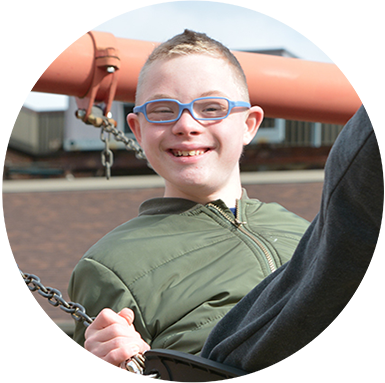 You can make a world of difference for people who live with disabilities, and for the people who work alongside them.