“What do we have to do to get him here?” That was the question Nico’s parents asked themselves after they visited Elim for the first time. They knew that Elim was going to be a safe place for their son, and that it could provide him with all the resources that he needed to thrive and not just survive. Everything he needed was all wrapped up in one place!

Everything Nico’s family heard about Elim was that it centers on each student’s individual needs, and they knew it was going to be the best place for him.

One of the many things that stood out to Nico’s family about Elim is that in addition to its emphasis on academics, Elim is also a Christian ministry. Faith has always been important to their family, so they were eager for Nico to experience that faith in his time at school.

After a three-year process, Nico finally came to Elim. He has now been at Elim for a year. It hasn’t been an easy year for him; he started during blended learning and had to adapt to a new school and a new routine.

Now he gets up every morning and begins his 45-minute bus ride to school, which he enjoys! He likes to read, ride a bike around the hallways, and is very eager to go in Elim’s swimming pool! He is spending every minute working hard towards his goals, such as his verbal communication skills and being more independent in making choices and getting through each step of every day.

Once Nico learned how to better communicate his wants and his needs, he increased his academic opportunity. He learned to use an application called Touch Chat, which allows him to communicate through an iPad. Because of this simple technology, Nico can now engage more fully in his classes, and his teacher reports that he now likes doing his schoolwork. A student who likes homework is noteworthy indeed! Nico is positioned to begin working on other academic goals such as reading and writing.

Besides communication, he is also practicing life-skills as well, and doing so as independently as he can. These skills will help him to reach his goal of self-reliance and prepare him for increased independence as he gets older. Just one quick example: instead of asking for help with his lunch, Nico can now retrieve his lunch box and get his meal ready independently.

Nico has made so much growth in his first year at Elim. His family is excited to see how much more he grows and learns. 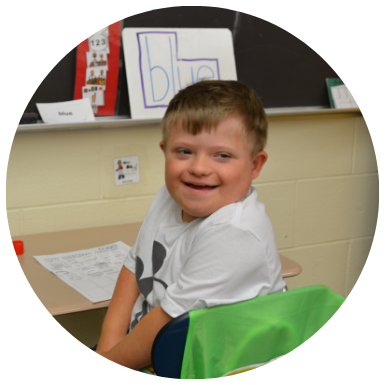 Supporters like you make Elim possible for Nico and his family. But you are also making this possible for hundreds of other students and adults every day.